Hey all,
I was accepted for NPR's "All songs considered". I was hoping that you all could vote for me (unless you think I suck, then please refrain). You can vote by clicking here

If I get the highest score I think I become president of NPR. Or I get a box of meats. Or maybe I'll be pope. Or maybe these voices in my head will stop.

Thanks everyone,
Mark
Posted by Mark Schwaber at 7:26 PM 2 comments:

School for the What the Hell? 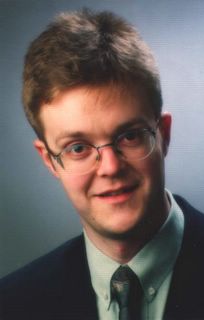 school for the what the hell?

Jen and I went to see Henning last night at the Bishop's Lounge. We knew we couldn't stay too long (which sucks because Lesa sounded great and Matt Hebert told me he was covering Sarah McLachlan's "Adia") but had a great time nonetheless. Pictured above is Henning. At least that's what a google search for "images" told me. He looked a little diferent last night. Not so, I don't know...tilted.
Henning writes wonderful songs. I can laugh like crazy one moment and then be musically and lyrically stunned the next. His stuff breeds jealousy. I'm going to cover that song about the wedding as soon as it's recorded...fucking beautiful. Go read his wonderfully funny and crazy busy blog.
My next record is underway and we already have 2 songs mixed. The beginning of May brings Ruth Keating (the Malarkies, Ida) and more recording. She's playing drums on a few songs of mine. What an honor. I would love to see you guys at Night Owl this Saturday at 7PM. I'm playing a short solo set and then a band called Ponies in the Surf are playing. If you haven't heard them you should. They have really complex jazz changes and weird little indie pop melodies. Very cool. Thanks to Chris of Aboveground Records in Martha's Vineyard for hooking us up with them. 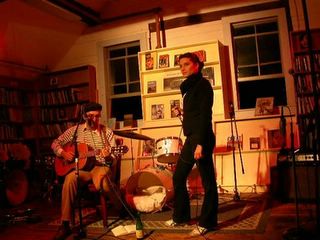 Ponies in the Surf
Posted by Mark Schwaber at 5:12 PM No comments:

boys amongst the biggest man 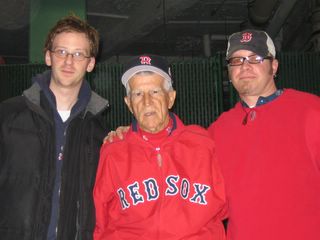 the bricklayer with the library card 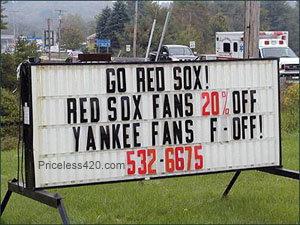 Here we go again. This time with a resounding lack of tension. There's nothing left to prove. Not only do they finally win it all but they start their amazing story by embarrassing their most hated rival off the field. Opening day of the 2005 World Champions has come and gone. What have we learned since the victory heard round the world? David Wells is still fat (maybe even fatter), Bellhorn is still constantly hungover, Kevin Millar is still everyones drunk uncle, Johnny Damon still can't spell "caveman" and Pedro is still pissing on the Boston media. The more things change...well, you know.
I started recording what will be my next record. We're doing almost all the tracking at the record store and at Jose Ayerve's house. He has such great ears and the same studio work ethic as I do. Use your time wisely and be thorough. It's such a pleasure to work with a best friend on something like this. We've got 5 songs that I'll be putting finishing touches on at Slaughterhouse this Tuesday. Anne Pinkerton, Matt Cullen and Paul Kochanski have already made their amazing contributions. I'm VERY happy with what we have so far. It looks like the second half of the record will be completed at the end of May. I think this record is going to be pretty dirgy. Strangely though, there seems to be a hidden happiness in it. Granted, it's VERY hidden. Also, good news for those of you with kids. There's no swearing on this one. I know I have a history of having the vocabulary of a bricklayer with a library card.
April 23rd - Night Owl Records - PONIES IN THE SURF and MARK SCHWABER - free in-store performance 7PM
April 26th - Bishop's Lounge - MARK SCHWABER, REBECCA CORREIA and MARTY HELLY - 9PM
Here's my new promo photo, for those of you interested: 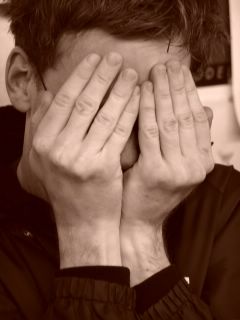